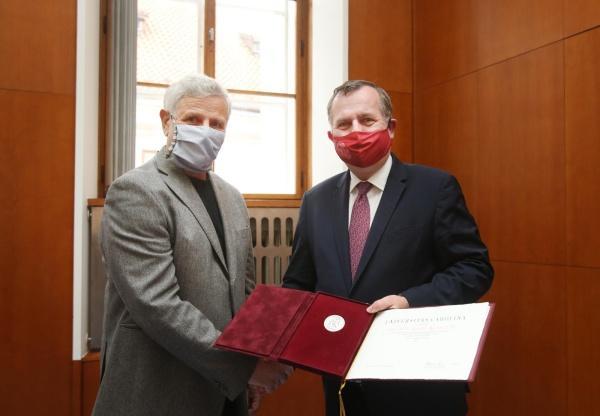 Prof. PhDr. Jaroslav Kučera, CSc. received a silver commemorative medal from Charles University for his life's work in the development of knowledge in modern history and for the development of the Faculty of Social Sciences of Charles University. He took it from the hands of the chancellor at the last meeting of the UK Scientific Council this year.

Professor Kučera is a leading historian of modern history who has focused much of his professional life on Czech-German topics. In the early 1990s, he was among the first Czech historians devoted to a critical reflection of the postwar displacement of the German minority in Czechoslovakia, and in other periods he devoted himself, among other things, to look at Czech-German economic history, as well as a macro view of the post-World War II peace settlement with Germany. He is a recognized expert not only in the Czech Republic but also abroad, especially in Germany. He is currently vice-dean of science and research at FSV UK, professor of the Institute of International Studies at FSV UK and member of the Scientific Council of Charles University.