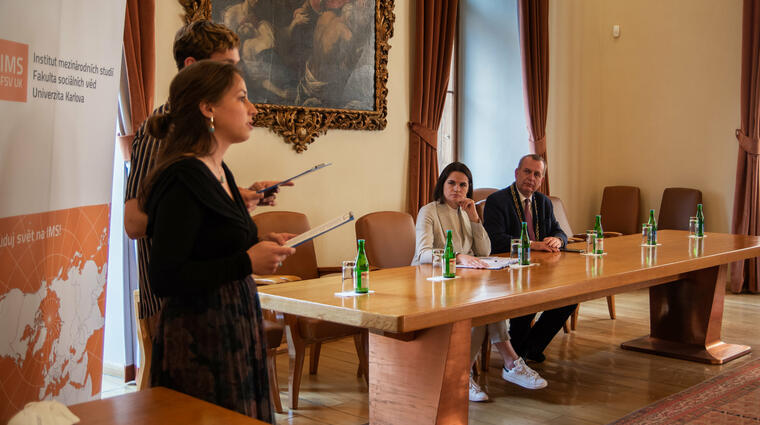 On Monday, 7 June 2021, the head of the Belarusian opposition, Svetlana Tikhanovskaya made a detour via Charles University and engaged in discussion with the Rector of the university and Czech and Belarusian students.

Reflexion of the Department of Russian and East European Studies FSV UK:

On the occasion of her four-day trip to the Czech Republic, during which she met among others, the President of the Republic, M. Zeman, the Prime Minister, A. Babiš, and the President of the Senate, M. Vystrčil, the head of the Belarusian opposition, Svetlana Tikhanovskaya made a detour via Charles University on Monday, June 7. After an interview with the Rector, Tomáš Zima, and a tour of the historical building, the opponent had the opportunity to meet around thirty students from all faculties. The audience, half of Czech students and half of Belarusian students enrolled at Charles University, lengthily and warmly cheered the opponent as she arrived in Malá aula.

Several interventions prepared in advance by young students succeeded one another. Czech students took to heart to pay tribute to the courage of the Belarusian in exile and to show their respect and solidarity towards her, noting that this was not the first time in history that Czech universities have hosted on their benches students from the former Soviet republic. Czechoslovakia in the 20th century had already indeed provided a privileged refuge for Belarusian intellectuals on several occasions. Belarusian students, for their part, shared their personal experience, mentioning the reasons for their departure, the difficulties sometimes encountered in studying abroad, but also their life in the Czech Republic and their plans for the future.

As a reminder, on August 9, 2020, outgoing Belarusian President Alexander Lukashenko was re-elected for a sixth term with nearly 80% of the vote. His opponent, the wife of the political dissident Sergei Tikhanovsky, incarcerated a few months earlier, reportedly won just 10% of the vote. The alleged massive electoral fraud angered hundreds of thousands of Belarusians who demonstrated across the country. Severely repressed by the security forces, the protest movement has lost momentum over the months. The fight for free and fair elections is not over, however, and is now being waged from Vilnius in Lithuania, where Svetlana Tikhanovskaya has found refuge.

The Rector of Charles University thus pledged, during the meeting, to support Belarusian students who would like to continue their studies in the Czech Republic, by obtaining scholarships and advantageous costs for accommodation and catering at the university.

Tikhanovskaya lent her support to all Belarusian students residing in the Czech Republic. She also wished to underline the importance of free access to education for students, regardless of their political opinions, an elementary principle which is no longer guaranteed on European soil, in Belarus. She reminded that over 50 university professors were even fired for taking sides with the students and opposing the regime. Tikhanovskaya finally encouraged the young people present at the meeting to take five to ten minutes of their time to write collectively to political prisoners in Belarus for whom letters of support provide invaluable moral comfort.

The visit of the Belarusian opposition leader to Charles University ended with the traditional photo in the courtyard of Karolinum with all the students, in front of the statue of the priest Jan Hus, a symbolic nod since the former rector of the university had made the struggle for truth, like Tikhanovskaya, the cause of his life.