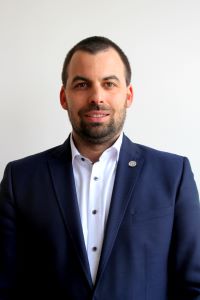 Tomáš Nigrin works at the Department of German and Austrian Studies at the Institute of International Studies, Faculty of Social Sciences, Charles University. He studied International Area Studies, German and Austrian Studies and Modern History at the Faculty of Social Sciences of the CU, and studied scholarships at Freie Universität Berlin and Humboldt Universität Berlin. He has had a number of research stays at the Heinrich Heine Universität Düssedlorf. He focuses on the history of Germany after the Second World War and on its current political development. He published a monograph on the construction of the Berlin Wall (Izolovaný ostrov. Západní Berlín a jeho proměny po stavbě Berlínské zdi) [in Czech, trans. the Isolated Island, West Berlin and its Transformations after the Construction of the Berlin Wall], the German shift away from nuclear energy (Německo bez jádra? SRN na cestě k odklonu od jaderné energie) a německé železniční reformě (Železniční reforma v Německu) [in Czech, tran.Germany without its Core? The Federal Republic of Germany on its Way to Deviation from Nuclear Power] and the German railway reform (Railway Reform in Germany). In the last years, he focuses on the history of transport in Czechoslovakia and has habilitated with this topic in the field of modern history at the Faculty of Social Sciences of the CU (Od nepostradatelnosti ke stagnaci? Železniční odvětví v Československu v 70. a 80. letech 20. století.) [From Undisputed to Stagnation - The Railway Industry in Czechoslovakia in the 70s and 80s of the 20th Century]. He solved (and is solving) a number of domestic (GA CR, TA CR), international (Visegrad Strategic Grant) and Operational (New Mobility) projects.

Since 2019 he has been Director of the Institute of International Studies at the FSV UK. In previous years he has been the Institute Secretary, Vice-Dean for Development and Deputy Head of the Department of German and Austrian Studies. From 2014 to 2019, he was Chairman of the Academic Senate of Charles University, a member of the Rector´s Advisory Board of the CU, and a member of the CU Internal Evaluation Board. In the past, he also worked as a member of the Presidium of the Academic Senate of FSV UK. For the period 2018 to 2020, he was elected Vice Chairman of the Council of Higher Education Institutions.