Above picturesque Baščaršija, the heart of Old Sarajevo, there is the museum dedicated to the first Bosnian president, Alija Izebegović. The exhibition was opened in 2007 on the fourth anniversary of his death as a part of the Kovači Cemetery and War memorial complex. The museum occupies two beautiful towers, Kapi-kula Ploča and Širokac, that have been part of the fortress wall since the 18th century.

“Dedicating his life to freedom, justice, and democracy”, the exhibition highlights Izetbegović’s role in “the honorable struggle and [as] an advocate of democratic aspirations of the oppressed”.*  The first Bosnian president is portrayed as a strong, faithful, and respected statesman who devoted this entire life to religious principles and the wellbeing of his people. He symbolizes “the idea of Bosnia and Herzegovina as a multiethnic and civic state” and “stood strong against all attacks and attempts to divide the country and destroy its millennial [‘long-lasting’, added by this author] legacy of peaceful co-existence”. The museum’s narration places Izetbegović’s “never-ending love for Bosnia and Herzegovina” and its struggle to survive front and center. These virtues contrast with different understandings of Bosnia and Herzegovina which remain subliminal. The museum strives to depict everyone who does not share Izetbegović's vision as embracing various forms of nationalism, intolerance, and even hatred. In this exposition, one is struck by the absence of the other two components of the Bosnian tripod:  people who identify as Serbs and Croats. Members of these other constituent Bosnian nations are portrayed either as devoted adherents of Milošević’s or Tudjman’s nationalist ideologies (and therefore wanting to break up Bosnia and Herzegovina) or as Bosnians, id est, “people who accept this republic and cherish it as their homeland”. Based on multicultural and civic values, the idea of the Bosnian state as presented in the museum highlights a Bosnian identity which neglects or subordinates other forms. By doing so, the museum demonstrates an ambivalence or even a sort of schizophrenia. The idea of Bosnia and Herzegovina and the Bosnian people displayed throughout the exhibition implies an acceptance of Izetbegović’s command; he “aimed for a strong political organization of Bosniaks under the control of the national [added by the author] Party of Democratic Action” (SDA). It emphasizes its specific visions of the state. The fact that SDA’s vision for Bosnia and Herzegovina are congruent with those of Bosniaks is exactly what other nations and nationalities tend to point out and object to. 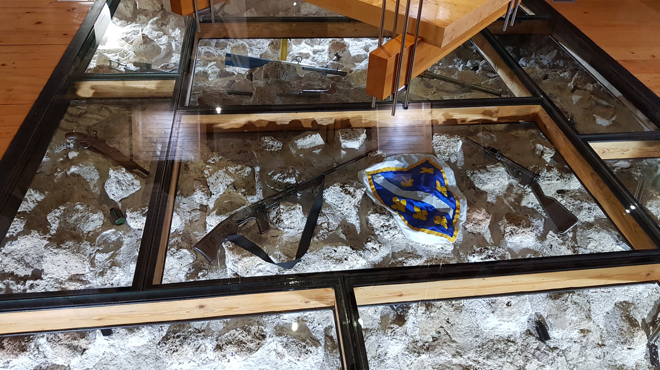 The highly complex causes of the Bosnian war and its connections to Yugoslavia’s fragmentation are neglected. The prelude of the war is reduced to one key statement, that being that Bosnian Serbs “coalesced around the Chetnik ideology and Greater Serbia politics”. It could be argued that the museum tries to distinguish between supporters of Chetnik ideology and other Serbs who did not share it, but rather supported multiethnic vision for Bosnia and Herzegovina. Although it seeks to avoid labelling Serbs collectively as Chetniks and to acknowledge the ‘good Serbs’, in reality this distinction is very subtle and blurry.

The war is presented strictly as “the attack [aggression - added by the author] of one powerful military machinery against an unarmed people with the goal of creating a Greater Serbia”. “JNA reservists brandished Chetnik symbols and terrorized the people, carrying out attacks on Bosniak and Croat property”. “Murders of Bosniaks and Croats became increasingly common”. The representation of Bosnian Croats, who are depicted at the beginning of the war as Bosnian defenders, changes after the installation of a para-state, namely Herceg-Bosna. Since then, Bosnian Croat leadership has been described as a collaborative force supporting Tudjman’s aggression on Bosnia and Herzegovina.

The exhibition does not reflect the fact that the outcome of the first multi-party elections in Bosnia and Herzegovina in 1990 was a political partition along ethno-national lines. The three national parties (Izetbegović’s Party of Democratic Action, the Serbian Democratic Party, and the Croatian Democratic Union) held mutually exclusive views of Bosnian independence from Yugoslavia. The non-nationalist, civic-oriented alternatives were at the beginning of the 1990s completely sidelined. The fear that one Bosnian nation would outvote and dominate the other two was strengthened by inflammatory rhetoric and propaganda on the part of nationalist elites. By mobilizing fear of the other two nations – an effective tool for inciting the war – nationalists also abraded intra-national conflicts and succeeded in unifying their particular ethnic groups. 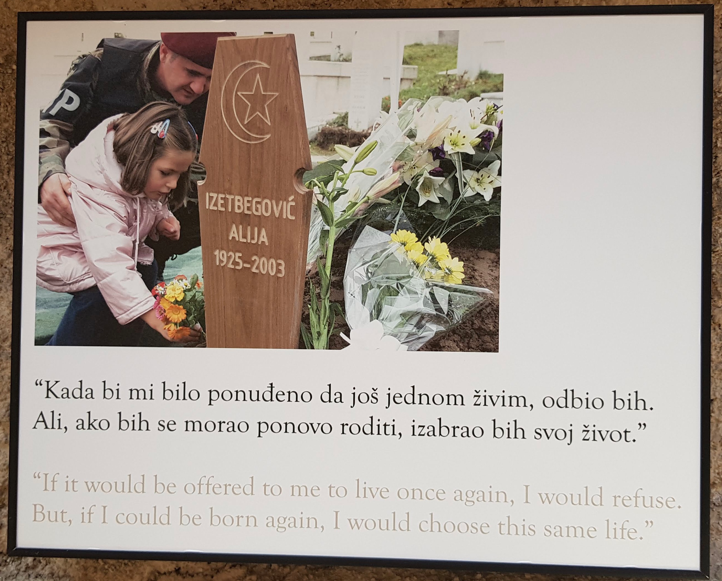 Having said that, we can hardly imagine that the museum’s exposition represents a balanced view of Bosnian contemporary history. Instead, Alija Izetbegović’s museum represents one of three ethno-nationally defined narratives. This Bosniak political discourse aims to combine two dominant lines. The first depicts Bosnia and Herzegovina as a multiethnic, multicultural, and heterogeneous state in which traditional, long-term, inter-ethnic and religious harmony was destroyed from outside. The second emphasizes the Bosniak/Muslim component that is connected with the long-term continuity of Bosnia and Herzegovina as a compact territory. It also neglects self-identified Croats and Serbs that did not acquiesce.

The museum’s narrative is ambiguous at best. On one poster, we read that “while Izetbegović painstakingly strove to maintain peace, prominent Patriotic league leaders in line with his views [emphasized by the author] procured, transported, warehoused and distributed arms, ammunition, and military hardware, and trained their activists before the war began”. In contradiction to his depiction as an advocate of peace, there is Izetbegović’s statement supporting his willingness to defend Bosnia and Herzegovina militarily. Another poster quotes Izetbegović during a speech at the SDA meeting held in Velika Kladuša in 1990, when the Socialist Republic of Bosnia-Herzegovina was still a part of Yugoslavia. He stated then that “the Muslim nation will take up arms to defend Bosnia! This is no joke! I say this to you in all seriousness, for there is a real risk that this state of ours [emphasized by the author] will be destroyed”. The museum interprets these statements as preparation for the defense of Bosnia and Herzegovina against an aggressor (or aggressors). However, let’s not forget that SRBiH was a unique case among the Yugoslav republics due to its national specifics, that is, this republic was not defined as the national home of one particular nation, but rather of three nations (Muslims, Serbs, and Croats) that cooperated on the basis of compromise. Unfortunately, in the broader context of a collapsing Yugoslavia, political leaders of the three Bosnian nationalist parties did not follow this compromise anymore and had been preparing for the war with different intentions. Unlike Bosnian Serbs and Croats, Muslims/Bosniaks do not have ‘maternal’ republics (Serbia and Croatia) and identify with the whole territory of Bosnia and Herzegovina.

The majority of Bosniaks consider Alija Izetbegović the most respected and important political figure. Bosniak discourse is undeniably complex and heterogenous; although there are Bosniak critics of his policies, the exhibition unequivocally portrays him as the symbolic father of the nation and creator of an independent state in the territory of the SRBiH. By praising his achievements, the exposition intends to appeal to locals and Muslim foreigners who support a unitary, non-decentralized Bosnia and Herzegovina. The museum emphasizes the close cooperation between Izetbegović’s government and Turkey. The museum’s website is written in four languages: Bosnian, English, German, and Turkish, despite the fact that Serbian and Croatian are also official languages in Bosnia and Herzegovina (although they are officially distinct, Bosnian, Serbian, and Croatian are in practice the same language). The museum represents one of the cornerstones of Bosniak national identity, serving both as a “reminder and a message for future generations”. Beyond the discourse about multiethnic and tolerant Bosnia and Herzegovina, the exhibition pushes the exclusively Bosniak narrative about Bosnia, which is carefully controlled by the SDA. In this discourse, there is a distinct ambiguity among Bosniaks and other nations and/or nationalities about ‘Bosnianness’. Even though it is not the main intent of the Bosniak leadership, this contradiction may lead to a monopolization of the right to rule Bosnia and Herzegovina.

* All quotations were taken from the website https://www.muzejalijaizetbegovic.ba/ or directly from the exposition.