Inspired by an article by Oto Luthar* about the multiethnic region of Prekmurje located in today’s Slovenia, I decided to spend a few days in this area, exploring the local culture, history and museums. Prekmurje is a historical region in eastern Slovenia, which until the dissolution of the Austro-Hungarian Empire after World War I belonged to the Hungarian part of the monarchy and, therefore, still remain a rich mixture of Slovene and Hungarian speakers today. 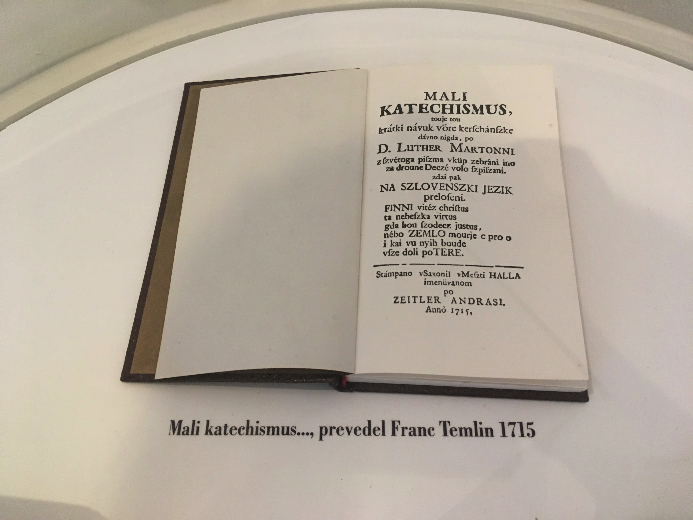 The complicated history of the region, where the Slovene, Hungarian and German languages were once used fully interchangeably, is presented in the Pomurje** Museum in Murska Sobota – the center of Prekmurje. The permanent exhibition in the museum describes local history from prehistoric times until the 20th century. Thanks to intelligible panels dedicated to particular chapters of Prekmurje’s history, and especially thanks to English translations, the visitor can understand why the region is so distinctive in comparison to other parts of Slovenia. During the exhibition, several historical artefacts are presented. For me – since I deal with the history of multilingual regions – some of the most interesting objects were the books written in the Prekmurje dialect. These books emerged in the 18th century thanks to the endeavor of local Lutheran pastors and nicely show the linguistic mixture of this area – the Prekmurje Slovene dialect written according to Hungarian spelling rules.

The period of Slovene nation building in the 19th century is also well presented in the exhibition, regarding the fact that especially foreign visitors have to keep in mind the differences between Slovenes from Prekmurje and Slovenes from Styria, which belonged to the Austrian part of the empire. The question of their unification became topical after World War I, after which Prekmurje finally became part of the newly founded Kingdom of Serbs, Croats and Slovenes as a Slovene territory. However, as displayed in the exhibition, the process of unification was very complicated – for a few days in 1919, there even existed self-declared Republic of Prekmurje. The battle of the Prekmurje territory between future-Yugoslavia and Hungary was supported by a lot of ideological material, a few of which you could see in the exhibition. Overall, the exhibition devotes significant space to the economic and cultural development of Prekmurje during the interwar and postwar periods as well as the again complicated position of this region during World War II, when Prekmurje was occupied by the Hungarian army and its population subjected to assimilation. After the war and its reunification with Yugoslavia, Prekmurje remained bilingual, as shown by the Hungarian reading-books for local bilingual schools. Unfortunately, there is no panel dealing with the development of Prekmurje during 1990’s and afterwards except for few displayed newspapers informing about the independence of Slovenia. All in all, I recommend to all visitors of Murska Sobota to spend some time in this museum located in the town castle. Apart from the permanent exhibition, the museum also organizes temporal exhibitions, for example, about the faith of Prekmurje Jews during World War II or local archeological findings and much more. 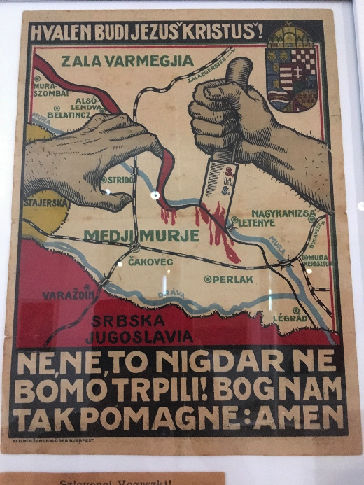 As I think about the Pomurje Museum in Murska Sobota, I realize that it is very open to foreign visitors and clearly presents local history. I cannot say the same about another museum that I visited: the Lendava-Lendva Gallery and Museum, located in Lendava at the center of the Hungarian part of Prekmurje. On one hand, the exhibition space in the local castle is more dedicated to artworks, but it also presents local history. However, the target group of the exhibition dealing with the history of Lendava are mainly Slovene and Hungarian visitors since the provided descriptions are only in Slovene or Hungarian. Overall, if you are not a Slovene or Hungarian speaker and you are interested in Prekmurje´s history, I recommend the museum in Murska Sobota. However, visit the Lendava´s museum if you would like to explore local art.

After exploring Prekmurje’s complex history and ethnolinguistic mixture, I took a look at how the history has been represented in the public space in the center of the region – Murska Sobota. As a visitor I was surprised how many monuments and memorial plaques remembering historical events can be found in the relatively small town (less than 20,000 inhabitants). During a walk in the town center, I saw several monuments in the main square and in the castle park. The main square of Murska Sobota (Victory Square) is dominated by a large victory memorial dedicated to Soviet soldiers and Yugoslav partisans, and nearby stands a memorial to the “defenders of Slovene independence” of 1991.  In the castle park, I was really surprised when I saw a sticker on a streetlamp remembering the few-days Republic of Prekmurje in 1919. Even though it was only a sticker, it shows that for some of locals, the distinct history of the region is still important. Also, official memorials remembering the unification with Styrian Slovenes and the liberation from Hungarian rule mention the particularity of Slovenes from Prekmurje.

This short post is based on my trip to Prekmurje, a region I was privately interested in. Even though this region is not an object of my research, I am still fascinated by the richness of Prekmurje’s history and its culture. I recommend visiting this northeastern corner of Slovenia to everyone interested in the diverse Central European regions.

* Luthar, Oto. “The Slice of Desire: Intercultural Practices Versus National Loyalties in the Peripheral Multiethnic Society of Central Europe at the Beginning of the Twentieth Century.” In Understanding Multiculturalism. The Habsburg Central European Experience, edited by Johannes Feichtinger and Gary B. Cohen. New York, Oxford, Berghahn Books, 2017.
** Prekmurje is a part of the contemporary eastern Slovenian region Pomurje.